As each year draws to a close, I like to reflect on what I’ve achieved, both in my personal life and my professional one. Amid the chaos of Christmas, it’s easy to feel out of control, and I find it grounding to look at each month in turn, and remember what it felt like at the time.

I’ll keep most of my personal successes and failures to myself (in brief: Welsh has plateaued; never got going with piano lessons; still doing yoga), but below is a year in the life of a writer… 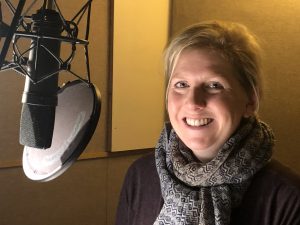 In the first month of 2019 I spent a few days in London, recording the audiobook for A Cotswold Family Life. It was my first time in the sound booth, and I absolutely loved it. My children now like to listen to the audiobook when I’m away, because it’s full of stories about when they were little! I also taught a Masterclass for for Guardian MA programme, and spent four days in Seattle, presenting After the End at the American Librarian Association. It was such a joy to meet so many librarians, and I also got to see one of my favourite North American bookstagrammers, @DanytheBookWorm_, who drove from Canada to meet me for coffee.

I also wrote a six-episode outline for the TV series of I Let You Go (I’m keeping my fingers crossed I might have some news about this next year), and started the research for book five, a novel about the ramifications of a death in police custody. Finally, I launched a VIP Facebook group for a hundred hand-selected early readers for After the End – the start of a very special six months with a great group of people.

More research, this month, with trips down south to my old force, Thames Valley Police. I met with the Head of Communications, Head of Professional Standards, and with the Police Federation, to get my head around the process that happens when somebody dies in police custody. I spoke with the families of police officers who have spent months (years, in some cases) under investigation for manslaughter, and I also spoke with families whose loved ones died during an encounter with the police. I created a chapter breakdown for the novel and had the whole story plotted by the end of the month.

I also edited my Quick Reads book, The Donor, which comes out in February 2020. Quick Reads are short books (around 20,000 words) written by bestselling authors, designed for emerging adult readers, or for readers struggling with time or focus. The Donor is about a teenager who has a heart transplant, and forms a strong bond with the donor’s mother. It’s a psychological thriller, and I loved writing it. The edits were straight forward, fortunately, and mostly involved linguistic changes, to make the text more straight-forward. 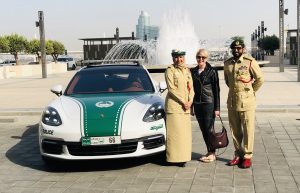 Escaping the cold, I headed to Dubai for Emirates Airline Festival of Literature, where I spent a week visiting schools, doing interviews and taking part in panel events. My husband (also a former police officer) and I spent a day with Dubai police, touring their high-tech stations and visiting Dubai men’s prison. I loved all of it, especially the prison visit, which sparked an idea that came to fruition later in the year…

I started book five, writing just over 37,000 words in March, and launched A Cotswold Family Life in Cheltenham. I had drinks with around twenty-five of my international publishers on the eve of the London Book Fair, following a meeting to discuss launch plans for After the End. 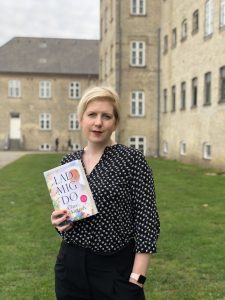 The first foreign book event I ever did was in Denmark, at Krimimesse crime festival in Horsens, and it was so lovely to go back. The event takes place in a former prison, which makes for the perfect atmosphere, and I love seeing the same faces in the audience, year on year. My Danish publisher, Siri, is a true force of nature, and it’s been a privilege to be part of her growing business.

Back in the UK, I went to Chipping Norton Literary Festival, to talk about A Cotswold Family Life, and fitted in another 35,000 words on book five. 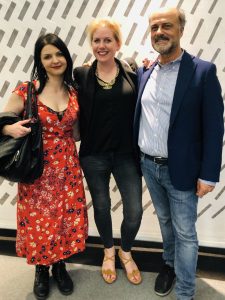 I spent a great couple of days in London, delivering advance copies of After the End to booksellers, and had events in Athens and Thessaloniki. My Greek publishing house is family-owned, and eating delicious food outside, with three generations of the same family, was one of my highlights of the year. Later that month I went to Romania with the British Council, for Bucharest’s Book Fest, where I met some fantastic people.

I wrote another 30,000 words in May, finishing the first draft of book five at the end of the month, and leaving myself three weeks for a rough edit. I didn’t feel great about it – the premise was strong and the story was sound, but it wasn’t singing, and I didn’t know why.

It still wasn’t singing in June. As I tackled the edits I went back to London for a marketing meeting 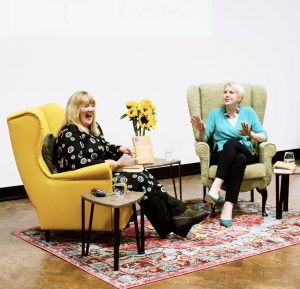 for After the End, and took a morning out to sit in court at the Old Bailey, watching a murder trial. A few days later I was back in London for a week of press interviews, ahead of publication day, staying at a beautiful hotel on the South Bank. I sent the first draft of book five to my editor as she was travelling up in the lift to meet me for cocktails! We met my agent for dinner and toasted book five, and I put my misgivings to one side…

After the End came out in hardback on June 25th. I celebrated with a launch event in my home town of Bala, North Wales, before heading off on tour for three weeks. I started reading submissions for the Costa Book Awards, in my capacity as judge for the First Novel category, and did some filming for a True Crime series.

I visited lots of bookshops and libraries, as well as talking about my book – and the story behind it – on BBC Breakfast, Sky News, and lots of radio stations. After the End hit the Sunday Times bestseller list in its first week, and stayed there for seven weeks. It was a huge relief, and amazing to see such great reviews rolling in.

Towards the end of the month I went to Theakston Old Peculier Crime Writing Festival, in Harrogate, where I shared an apartment with fellow authors Colette McBeth, Amanda Jennings and Tammy Cohen, and had a brilliant time.

My editor gave me some notes on the first draft of book five, and I put together a clear plan for the next draft. It would involve cutting almost half the existing story, and tackling it from a different perspective, but it would definitely help. 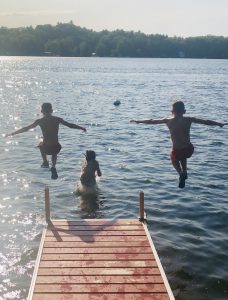 I took the entire school holidays off to be with my family, and it was absolutely perfect. We went to the States for three weeks. I had a few meetings in LA, and signed some books in La Jolla, but that hardly counts as work, does it…? I switched off my screens, and kept a notebook with me to jot down the myriad ideas that swirled around my head. I was staggered by the difference it made to my creativity, just taking some time out from screens and from ‘proper’ work.

I was still struggling with book five, lacking in enthusiasm for it, and worried it wasn’t singing in the way my other books had. A different idea had been lurking in the background for a while, and on the shores of a lake in Maine, it began to take shape. It was so insistent that I wrote up the pitch on my phone and sent it to my agent and editor.

With around forty books to consider for the Costas, I spent a lot of time reading, slowly whittling the list down to a handful of favourites. I launched an online book club, supporting my newsletters with a friendly Facebook group of around two thousand readers. It’s full of bookish chat around the structured discussions we have about each month’s book club pick, and it’s become one of my favourite places to hang out.

I should have been starting the second draft of book five, but I just couldn’t bring myself to do it. I felt I was missing something really significant – something clever, or different, that would make the book come alive, and until I knew what that missing ingredient was, I didn’t want to work on the book. Normally, September is a really productive month for me, and I hated not having something concrete to work on. I drifted; frustrated and anxious.

I talked to my agent about the new idea. She really liked it, and agreed it was potentially stronger than the book I’d already written. I fixed a date with my editor, and went down to London to brainstorm the story and trouble-shoot potential plot issues. No-one wanted to change our plans to publish my next book in 2020, so if I was going to change tack, I would need to write this new story super-fast. I spent the last week of September creating a chapter-by-chapter breakdown for what became known as ‘the new book five’. 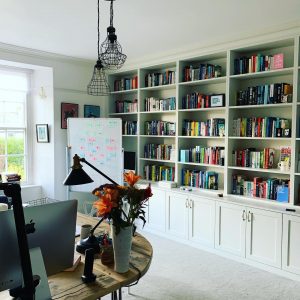 Somewhat reluctantly, I abandoned the four-day week that had been 2019’s resolution, and to which I had stuck to for the entire year to date. Instead of my usual word count target, I set out the chapters on my whiteboard, setting a goal of one chapter a day, and crossing each one out as I wrote it. By the end of the month, I had twenty chapters, and the book already felt like it was singing.

At the start of the month I met my fellow Costa judges, to ‘champion’ our favourite reads, and decide on a shortlist. It was an intense but very enjoyable morning, and I’m so proud of the four books we picked. As the head category judge, I now have to read all the category winners, ahead of the award ceremony in January, where we will decide on an overall book of the year. 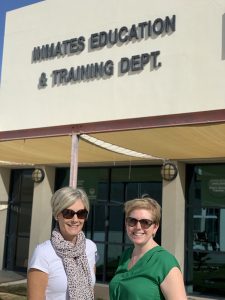 I went to Dubai to spend a week in the men’s prison, as phase one of a project I started planning in March, and which will come to fruition in 2020, when I will share more about it. Suffice to say, it was a remarkable, emotional, incredibly rewarding week. I shared it with psychological thriller writer Annabel Kantaria, who also showed me some of the sights of Dubai – a stark contrast to the environment in which we were spending our days. The day after I got back from Dubai I went to Ty Newydd, in North Wales, to teach at a four day residential crime and thriller writing course. Quite a contrast…

I wrote 24 chapters – the second half of the book – in November, bringing the first draft to around 75,000 words. The second draft will add around 25,000 words to that, but the story felt tight and complete, and – most importantly – it was still singing. My Norwegian publishers bought the translation rights, based on a half-page pitch from my editor, which was exactly the confirmation I needed that I was writing the right book! 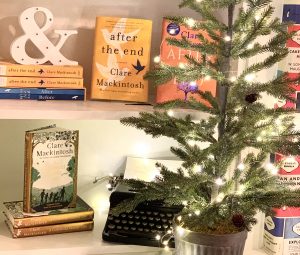 I had two weeks to read through the ‘new’ book five, and make some light edits, as well as wrap up some work from the Dubai project. On 11th December I sent the first draft to my editor and agent, and although I know there’s a huge amount of work ahead, I love the book and feel confident readers will love it too. Today is 13th December, and I’m wrapping up admin, writing my final newsletter of the year, tackling social media content for January and giving my office a much-needed tidy, before my out-of-office goes on and I take three glorious weeks off work.