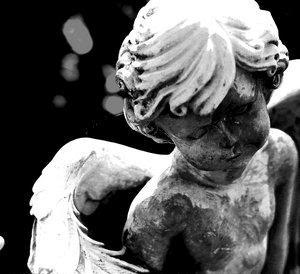 The churchyard is still and quiet, no matter what time of the year I visit. The church sits squarely in the centre, its heavy oak doors never locked, and few sounds to interrupt those seeking sanctuary. A cobbled path meanders through the churchyard, between ancient chest tombs and gravestones too weather-worn to read. Years ago I would run through these monuments, racing late to school with my mother as the church bell rang nine, the hidden histories of the churchyard nothing more than a playground to me.

On my wedding day I smiled to think of that four-year-old girl. I picked my way on silver heels across uneven ground, holding tight to my father’s arm and giving no more thought to the scattered headstones than which would provide the best backdrop for our photographs.

I didn’t see the children’s garden. I didn’t know it was there. I must have walked past it a thousand times without so much as a glance. It occupies a corner of the churchyard beneath an enormous pine tree, branches reaching out to cover each of its charges. The ducks in the pond swim past with a seemingly endless stream of fluffy ducklings, and I am at once comforted by this reminder of new life and pained to see it so close to the rows of tiny headstones, each name framed by a bracket of time so impossibly short.

Today I sit beside my son and clear the weeds which stubbornly creep across the rectangle of ground I am equally determined to keep clear. I need to see the earth, I can’t bear to think of the grass closing in and shutting me off. Now, I can place my hand flat on the ground, the damp earth pulling at my skin, and know he is just beneath me. Almost touching me.

I tip out the rainwater from the little metal vase and fetch fresh water from the dripping tap in the corner of the churchyard. I cut short the yellow roses which are really too big for such a small grave, and replace the vase in the base of the stone. His headstone is simple: a square of white marble, the lettering picked out with a gilt which shines as I rub a cloth over it to remove the lichen and fallen pine needles.

I work methodically, feeling lighter as the grime comes away and the stone is once again clean and bright. I don’t talk to him – at least, not out loud, not in the way I see others doing, their lips moving as they stand beside well-tended graves. Instead I think. I think about how I should be tidying his bedroom, not his grave, despairing at the Lego figures scattered across the floor, the balled-up socks under the bed. Sometimes I rail inside at the injustice of it all, screaming silently at a world which lets children die. But mostly I test out my grief. I open it up, just a little, in the way you probe a sore tooth, to see if it’s still there. To see if time has healed. It never has, of course. Even just that tiny chink releases a bolt of pain which knocks me sideways, the familiar tightness forming in my chest and closing my throat until each breath is an effort.

I realise that someone has left a small pewter angel by the side of his grave. I didn’t put it there, and the flowers of those few who visit regularly are never accompanied by anything more permanent. Looking around, I see there is one next to every grave. Two dozen tiny angels, placed with care to watch over these babies. It doesn’t matter to me who put them there: it is enough to know that there are others who care, when so often it feels the world has forgotten.

I say a silent goodbye and leave my son with the other children, safe beneath the outstretched arms of the pine tree, in our quiet corner of the churchyard.