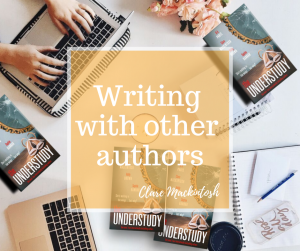 The Understudy – a book I collaboratively wrote with three other authors – is out now, and my timeline is full of the same question: what’s it like writing with other authors? There are many successful writing duos (try Nicci French and Ambrose Parry, for starters) but add another couple of writers into the mix and surely things get complicated? I’ve written previously about how how long it takes to write a novel on my own, so I thought I’d outline the process for this collaborative book.

The Understudy began as a commission from the US-based Serial Box, a subscription service delivering fiction in weekly ‘episodes’. They assigned an editor to the project (Lydia Shamah, now commissioning original fiction for Audible) and recruited a lead author: Sophie Hannah.

In October 2017 Sophie hand-picked the authors she wanted to work with, and as a huge fan of her books I was honoured to be asked. The project sounded interesting, and as I was starting to look at screenwriting work I thought it might be useful practice in working collaboratively. When you’re writing with other authors it’s useful – essential, even – to get on, and I’m happy to report we all had a whale of a time. 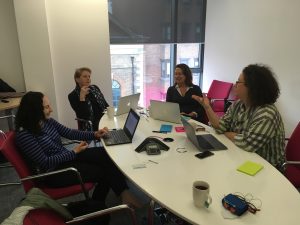 The concept for The Understudy – malevolent happenings at an Uber-competitive musical theatre school – was Sophie’s, and in April 2018 we held a ‘story summit’ in London. Holly Brown flew over from California, B A Paris joined us from France, and the four of us spent three days holed up in a room with a big white board, masses of post-it notes, and Lydia to keep us on track. We identified and worked on the characters, sketched out the story’s main narrative arc, and discussed twists and reveals. The story would be told by four women (mothers of girls at the theatre school) so we each took one women as the point of view from which we would write.

A couple of weeks later we circulated our character studies: documents describing our character’s physical appearance, motivation, weaknesses and strengths. This was an important part of the process, as although we would be writing from only one characters point of view, we would be writing about the others, too. Sophie summarised the story, as we’d developed it at the summit, broken down into sections. We each had two 10,000 word ‘episodes’, plus 2,500 words of the first section (the ‘pilot’) and 2,500 of the final section.

Writers work in very different ways, but when you’re writing with other authors it’s hard to take a ‘see what happens’ approach, because everyone else’s sections depend on what you write in yours. We each worked on a synopsis of our sections, giving enough detail for everyone to be able to visualise what would happen, and circulated these, taking feedback from each other, and from Lydia. Once they were agreed, it was time to write!

Writing with other authors

Because writing is usually such a solitary activity, it was nice to have some virtual company, and be able to brainstorm when we got stuck. Mostly, though, during the summer of 2018, we worked on our own sections, with a couple of conference calls lead by Lydia. We’re all relatively experienced novelists, used to working with editors, so taking feedback wasn’t too painful, and always resulted in stronger writing. Lydia edited the finished draft in autumn 2018, and by the end of the year we were done. 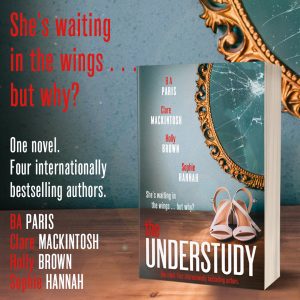 The story was published by Serial Box as an e-book serial and in audio, with paperback rights sold to the UK, Lithuania, Romania and Poland, so far. In the UK the paperback is been published by Hodder, and is available from Amazon and Sainsbury’s, and lots of other places (if your independent bookstore doesn’t have it on the shelves, they will be able to order it for you).

Would I do it again?

I really enjoyed writing with other authors, and would definitely consider another project in the future. I’d love to know what you think of The Understudy, and if you can spot the differences between each author’s writing styles!

How far would you go to protect your daughter?

Carolyn, Bronnie, Elise, and Kendall are bound together by one thing – their four daughters are best friends at the highly competitive Orla Flynn Academy for the Performing Arts.

Imogen Curwood is a new girl at the Academy and her behaviour is odd from the start. On the day she arrives, bad things start to happen. As one threatening incident follows another, the four mothers begin to ask themselves: are their girls in danger?

When an attempted murder rocks the school, Imogen is pleased to report that she has an alibi. If she isn’t the guilty party, someone else must be.

Carolyn, Bronnie, Elise and Kendall are determined to uncover the truth and protect their daughters. But are they prepared to risk their own secrets being exposed?